St. Mark’s College and Corpus Christi College are excited to announce the Father David Bauer, CSB Award for Athletic Excellence, which supports students who are involved in athletics.

Made possible through the generosity of Rabbi Yosef Wosk, PhD, ThM, this award honours the legacy of Father David William Bauer, CSB, who was a beloved teacher and chaplain at St. Mark’s College at UBC.

Father Bauer was an accomplished hockey athlete and coach and one of the most significant contributors to Canadian amateur and international hockey. He established the Canadian men’s national ice hockey team in 1963, received a special Olympic Medal for sportsmanlike conduct while coaching in 1964, and coached national teams to bronze medals at the 1966 and 1967 World Championships as well as the 1968 Winter Olympics. Father Bauer was awarded the Order of Canada in 1967 and was inducted into the Hockey Hall of Fame in 1989.

While his accomplishments were many, it was Father Bauer’s vision of hockey and sport that made an impact on so many people. Throughout his career, he approached sport as a means to teach important lessons about life, develop community, and promote world peace. He was also an advocate for players pursuing higher education.

In a special for The Catholic Register, Greg Oliver wrote, “Fr. Bauer was both a man of the cloth and a priest of the rink, and no matter which one was speaking, he could influence you in profound ways, inspiring you to do better for your team, your country and your faith.”

In keeping with Father Bauer’s commitment to sportsmanship and education, this $1,000 scholarship will be awarded annually to an undergraduate student at Corpus Christi or St. Mark’s College who plays on a sports team and demonstrates sportsmanship and community engagement.

More information on how to apply for this award can be found on our websites: 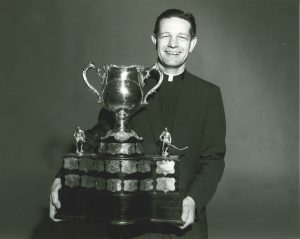